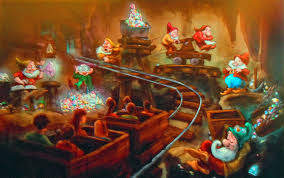 The imagineers at Walt Disney are hard at work building new attractions for their patrons. At the center of New Fantasy World, construction for the Seven Dwarfs Mine Train is steadily underway. The new roller coaster ride takes passengers on an adventure filled ride starting outside, then swooping into the deep mining caves of Snow White’s seven dwarfs. The ride slows down once inside the dark cave revealing millions of diamonds and gems. Passengers if they are lucky may even glimpse one of the dwarfs working in the cave. As the train exits the cave it reverts back into a fast thrilling roller coaster sure to ignite a few happy screams from adrenaline rushed passengers. The Seven Dwarfs Mine Train is scheduled to open in the Spring of 2014.

The last new Disney attraction is the Wilderness Explorers Program, an attraction located in the Disney’s Animal Kingdom theme park. The Wilderness Explorers Program is an interactive educational program for families big and small to learn while having fun. Thirty locations around the park are set up for families to explore and learn more about the wilderness. Imagineer Alex Wright describes the attraction as “locations where kids and families can pay a little closer attention to the things that they see, dig deeper into the educational side of it, earn badges that sort of elevate their stature as Wilderness Explorers over time”. Modeled after the movie Pixar movie “Up” children can be Wilderness Scouts for a day and earn merit badges after completely each interactive station. This new attraction opened up to the public on June 1st and is quickly becoming a favorite for young visitors of the Animal Kingdom.