Even though Olympusweb.com is a company with international clients, we like to feature local events and businesses on this blog from time to time. Supporting your local businesses is something that everybody should do and will help to keep your area economy strong. With that said check out this article about Florida Beer Company: 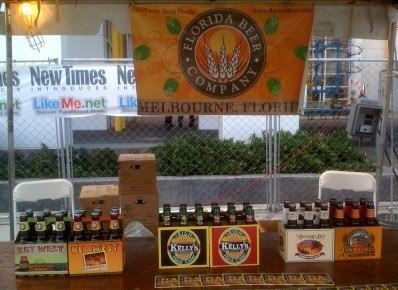 There is nothing more refreshing than a nice cold beer on a hot summer’s day and luckily for Melbourne residents, there is the Florida Beer Company (FBC); a local craft brewery founded in 1996 as the Indian River Brewing Company. Housed in a former cigar factory, the brewery is located right off Harbor City Boulevard in Melbourne. Beginning with just two beers, Indian River Shoal Draft and Indian River Amberjack, the FBC now offers over ten different varieties, including seasonal brews.

Ybor Gold, the most plentiful of the Company’s beers, comes in five different varieties: Amber Lager, Wheat Ale, Brown Ale, Gaspar’s Porter, and Light. Ranging from light to dark, malty to hoppy, and light to full-bodied, there is a taste for every palate. The Amber Lager won both the 1997 Silver Medal and 1999 Bronze Medal at the Great American Beer Festival and can be found year round. The Wheat can be found in spring, the Brown in the fall, the Porter in winter, and the Gold in summer however you can find all the flavors year round in the Ybor Gold Variety pack.

Next up are the Key West selections – Sunset Ale, Pilsner Light, and Southernmost Wheat. Ranging from medium to light and all favoring the malty side, they are a great way to beat the heat. Varying a bit from the norm, the Sunset is a tropical Amber Ale and the Southernmost Wheat is a Belgian-Style Wit Beer with notes of coriander, orange peel, and with a nod to its Florida roots, key lime. Finishing out the FBC’s offerings are the Shoal Amberjack and Shoal Pale Ale and the La Tropical.

You can stop by the brewery Tuesday through Saturday from 11am to 6pm to check out the tasting room and try some of the different selections and be sure to check out the blog on the FFBC website to find some creative beer based drinks and recipes, news about the brews, and different FBC events. FBC is the largest craft brewery in Florida and lets keep it that way; pick up some FBC brews at your local store or order some of their award-winning drafts your next time out at the bar!