Is it Shark Week or Shark Month? 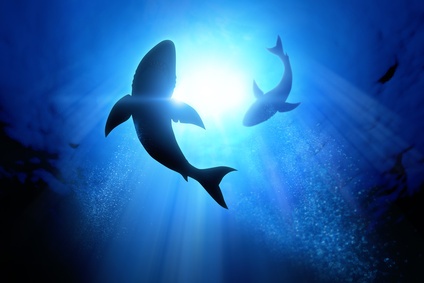 Shark Week first aired in 1988 on the Discovery Channel. Since then, it has become a world-wide cultural phenomenon.  It is broadcast in over 72 countries and is the longest-running cable television event in history.  There are some really neat factual shows broadcast during this week on the Discovery channel, as well as a few slightly exaggerated fictional shows designed more to entertain than educate.  But let’s face it – many people also can’t wait to tune in for the purely fictitious shark shows, such as Sharknado on the Syfy channel.

Here in the Melbourne/Palm Bay area of Florida, we don’t just watch for sharks on TV. We live it.  It lasts more than a week.  In fact, it lasts more than a month.  Florida is sometimes known as the Shark Attack Capital of the World!

During the months of August and September, we get large schools of fish swimming along the Brevard County beaches.  This includes mullet, anchovies, sardines and herring.  Since these are very tasty meals for sharks, the sharks follow the food.  Sharks that are often seen in our waters include blacknose, spinners, blacktip, bullsharks, makos, and sandbar sharks.

Because of the food migration, most shark bites occur during these months.  So far in 2014, in Brevard County, there have been five reported shark attacks, which is about the same as 2013 and 2012.  Fatalities are rare – in fact, the last fatality occurred in 1934.

For visitors to Brevard, Volusia or Indian River Counties, you are more than 9 times more likely to get bitten than if you visit any other Eastern Florida County beaches.  It’s not quite known exactly why this is the case, but some theories have been presented.

However, there is still a very low chance of being bitten by a shark.  Most sharks bite simply because they are hungry and they think that you are a small fish.  Therefore, once they bite human flesh, they usually quickly release.  It’s good to take a few precautions if you’re getting out into the water.  Remove any jewelry as this sometimes mimics some of the bait fish that are so tasty to sharks.  Also – if you see large schools of bait fish, it might be best to get yourself out of the middle of the pack and wait until they pass by.