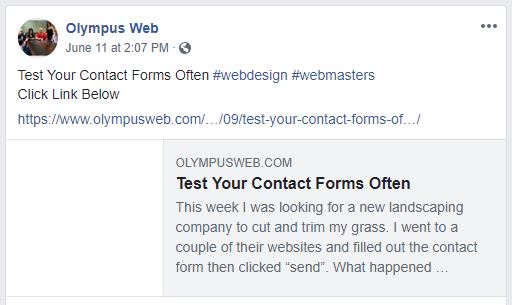 Facebook is a lot of things. It is probably the best pure social media platform there is in regards to connecting with friends old and new. It helps small businesses grow by connecting them with their customer base. For all of its advantages it does suffer some imperfections and some of them are down right annoying.

One thing that tends to happen to a company as large as Facebook is they create a product so large that it gets beyond their full control. They make changes and just keep rolling forward. Something that may have worked perfectly fine for years, does not work any longer. And with Facebook, there is no real support staff. Their logic is that “hey, its free, why should we care what you think?” Have you ever tried to contact Facebook directly? It is laughable.

The biggest mistake a web developer or website owner can make is set up a product without testing it as if they were an actual user/customer.

Recently (Most of 2018), a glitch is happening with people who share their blog on Facebook. They are getting a void where the preview image should be (See Above Image). I have researched it and found that Facebook now only scrapes the page for the “featured image” on a WordPress blog. It basically ignores the other images in the page. You may think, ‘well I will just move my image to the “featured” spot and it will be fixed’. The problem with this “fix” is that the featured spot sometimes is not included in the original web developer’s web design. Or, it may throw the look of the blog out of whack by having a huge image at the top of the page.

Eventually the brainiacs over at Facebook will get wind of this glitch and fix it and this blog post will become obsolete. But for now, at least, you know why it is happening.

Note: Other people in other blogs suggest re-scraping the mage using Facebook’s debugger tool. This is a good fix when it has scraped the wrong image and you want to change it. But for this particular glitch, it is of no help.

Added 6/15/18: Fix. If you set your image as the “featured image” then share the blog on Facebook, you can then remove the featured image immediately after. The scraped image shared on Facebook should stay intact.