Hey guys don’t forget that the parade is tomorrow morning. There will be lots of drinking so be careful and catch a cab if need be. I heard they have a cab service that takes whatever you feel like paying for cab fare. 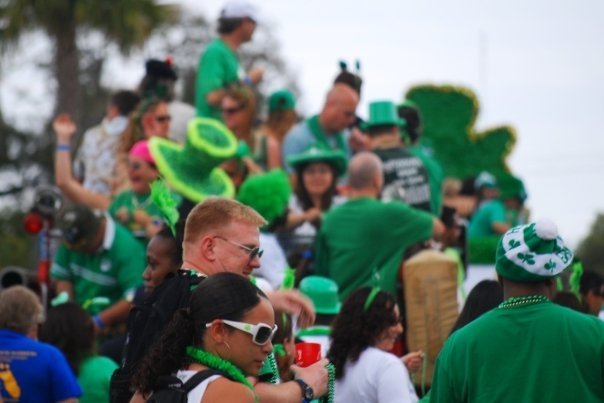 Parade begins marching east down New Haven Avenue to Depot Drive in Historic Downtown Melbourne. The parade lasts almost two hours, so bring a lawn chair or a blanket to sit on if you don’t feel like standing. Plenty of
free parking is available on the side streets.

The parade is very lively. Images of Ireland are immediately brought to mind
as the Irish Bagpipe players get everyone in a festive green mood. There are
plenty of floats and decorated cars, trucks and boats. Look for St. Patrick (the
patron saint of Ireland) to make an appearance. Salute and cheer for our
military as they march on by.

The local St. Patrick’s Day parade brings a bounty of treats for young and
old alike. Plenty of candy is thrown out, so have the kids bring a bag. There
are also loads of green beaded necklaces given away-young, old, male or
female-everyone is wearing green by the end of the parade.

The parade is sponsored by The Ancient Order of Hibernians (a Catholic Irish
organization that helps to keep alive the Irish traditions) and Meg O’Malley’s Irish Pub & Restaurant.

Wear something green to the parade. If you have a green wig, a crazy
leprechaun hat, or some St. Patrick’s Day novelty items you’ve been dying to
wear-this is the perfect opportunity to display the Irish side of you. Don’t be
shy. The Florida sun is hot in March, so wearing sunscreen is a good idea.

Before, during or after the parade, stop in at The Irish Shop located at 818 East New Haven Avenue in Historic Downtown Melbourne Florida, located right on the parade route.